"The odyssey of a small Greek beer". With this title, the chemical engineer Dimitris Politopoulos became the headline of the New York Times, who instead of a journey to success met the hell called the Greek market and legislation. 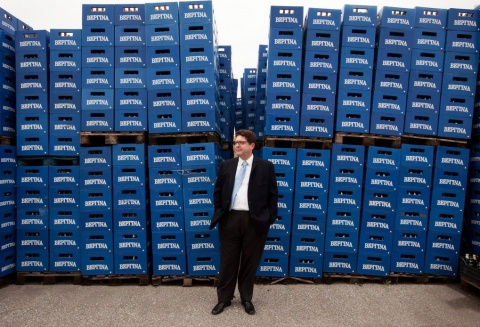 It was very obvious that anyone who undertook such an undertaking would not be able to reap the fruits of his labors. As John Protopapadakis wrote in his wonderful website, Dimitris Politopoulos, from America’s ruled, had this conviction when on 13 February 1998 he would issue the first invoice for “Vergina” beer. However, the journey to success has evolved into a true odyssey – an odyssey has come to become a front page in the New York Times.

Who is Dimitris Politopoulos?

Chemical engineer Dimitris Politopoulos, born in Athens, decides to refine his knowledge in brewing at the famous Stevens University in Chicago in order to implement a daring idea: to return home and create a Greek brewery with the aim of producing, bottling and supplying beer of superior quality, produced from Greek barley and have a Greek name.

The daring of the venture is reflected in the reactions of his Greek friends when he reveals his plans in 1994. “But Greece already has beer. Heineken.” everyone answered. Indeed, the Dutch giant with a market share of over 90% (second highest worldwide after 99% on the Egyptian market – today, it has fallen to 72%) had identified the name and the color green, with beer.

In fact, according to what Dimitris Politopoulos said to New York Times, redeeming its hegemonic position has imposed on our country prices 30% higher than prices in the Netherlands – it is no coincidence that Heineken’s sales in the Greek market contribute to 7.1% of the total operating profits of the group.

Research in the local market

While in the America, the emerging entrepreneur is conducting research into where the brewery will be and what its production capacity will be. Although Chania was the first choice, the second one, Komotini, was selected, with a capacity of 200,000 hl / year, as it was more industrially organized and had the best water (according to the tradition, there was first Greek beer produced in ancient times) , the basic raw material of beer.

Two years later, in 1996, the 36-year-old chemical engineer, with the help of his older brother and father, returns home and invests 10 million euro in Komotini. It is unknown why this investment in the border region was rejected twice by the development law subsidies.

A year later, an automated high-quality production unit is created under the name of Macedonian Thrace Brewery SA, but production is delayed as local aluminum cans producers are creating more obstacles, with the first bottles that come to be problematic.

The brand new, authentic Greek beer, selected the name of a famous place where a Greek archaeologist Manolis Andronikos discovered a burial monument including the tomb of Philip II, father of Alexander the Great: “Vergina”

However, the first serious problems not only will not be late, they also take the form of an avalanche. The wholesalers return the product by saying that they “risk their home,” the brewery’s call center is receiving threatening phone calls, many workers are leaving, unable to reject attractive offers from competitors, distributions sabotaged by emptying fuel from lorries, several trucks of affiliate distributors destroyed , while there are rumors that Turks are behind the new beer.

The Greek company does not “sit with their hands crossed” and decides to go into the counter-attack. Starts exports – now exported to the US, Australia, Cyprus, Germany, Italy, Spain, Poland, Japan and Albania – reduces prices for hotels and ships, makes cheap and branded beer for supermarkets and reduces the price, up to 50%, in the aluminum cans.

Fine by the Competition Commission

A few years later, in 2003, they informed with a letter the European Competition Commission for the grim situation of the beer market, and the corresponding Hellenic Commission in 2005, which delivers a voluminous dossier on the abuse of market leader. Partly justified, as in 2007 the European Commission imposes a fine of 219 million euro on illegal business practices on Heineken at its headquarters in the Netherlands.

Dimitris Politopoulos, a restless spirit, does not want to be limited to beer production, but wants to expand the product range by producing herbal drinks that are abundant in Thrace. But here he has to face another insuperable puzzle, as according to a “dark” decree, breweries in Greece must produce only beer and nothing else. A decree drawing its origins from King Othona’s years…

He succeeded due to insistence

Nowadays, Vergina beer accounts for 6% of the Greek market (now there are 13 small Greek breweries), with Macedonian Thrace Brewery being considered – with an annual growth approaching 30% – of the most emerging and promising companies in Greece. The example of Dimitris Politopoulos, nevertheless, reminds us that with a weapon of vision, determination, stubbornness and a quality product, success will come.