Among the winners from the Ministry of Agricultural Development and Food, scientists, researchers, farmers, representatives of Cooperatives and entrepreneurs that have been distinguished for their successful innovative business activity in the agri sector, are also included local producers from Thrace and Drama. 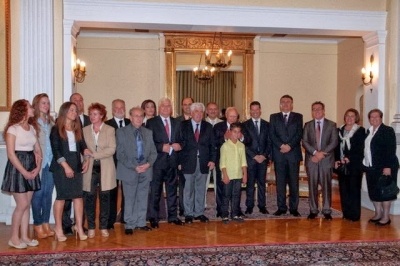 The winners of YPAAT, accompanied by the Minister Mr. Athanasios Tsaftaris, met with the President of the Republic, Mr. Karolos Papoulias, who, since he congratulated them for their work, subsequently rewarded them for this.

After presenting Mrs. Katsikoudi Theodora, from Macedonian Thrace Brewery (Vergina), to the President of the Republic, Mr. Tsaftaris explained that: “Mrs. Katsikoudi is representative of another big effort that is made in Komotini by Mr. Politopoulos and his team. Along with the Vergina Beer the company now produces two ice teas, starting from the mountain tea, which is called “Tuvunu”. Greek mountain tea’s farmers are mainly women who gather it for the company and this production might be increased by ten times and even then California’s orders might not be satisfied with such a high demand!”

Mrs. Katsikoudi mentioned that: “For Tuvunu tea, we have contracts with many farmers in Northern Greece. They gather the tea for us, we add honey and lemon juice and we pack it. Our goal is to create a global product. The company is up and runnin for less than 12 months, but it’s doing very well. I have brought you a symbolic gift and it is a great honor for us, Mr President, that you have accepted us”. Mr. Papoulias answered: “Thank you very much. And I want you to know that I grew up with mountain tea, from the mountains of Epirus”.

The winners were distinguished for their successful innovative business action in the agri-food sector at a ministry event organized by the 78th Thessaloniki’s International Fair on “New IDP: Innovation and Development in Greek Agriculture”.

“You gave me great pleasure, because I am of those who believe in our land. I believe in what you do and you do it both scientifically and in a traditional way, and you continue to do something that Greece has lived through. That’s why I believe in earth’s power”.

“You amazed me with what you did. I wish all Greece knew it. You would be the brightest and most powerful example for the one who says “nothing is done”. Many things are done and much more can be done. The crisis had to come to reflect on what we could do? I wish to be the positive side of the crisis. But you started before the crisis and you overcome the difficulties ” said Mr. Papoulias among others and noticed that: “And something important too: what you are doing is a Greek product”.

“I want to congratulate you and tell you that when I talk to people like you I am very optimistic. We will come out of the crisis on our own, but we will do things that many are going to say “These are the Greeks, that is Greece”. “Thank you very much and we should take a step further and visit you where you work”, Mr. Papoulias concluded.